You are here: Home / Science Meditation / Escape Velocity or How to Almost Get Away from Your Thoughts

Gravity Binds Us to the Earth

Releasing Ourselves from Earth’s Gravity 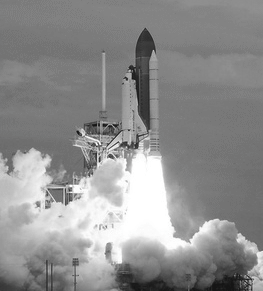 What if we wanted to float off into outer space? How would we counteract the Earth’s pull? We would use powerful rockets that burn millions of kilograms of fuel to push us upwards and counteract the Earth’s mighty gravitational force. The tremendous thrust these rockets generate would send us skyward and once we were far enough away, the Earth’s gravitational pull would be negligible. At this point we could let go of the rocket thrusters. We wouldn’t need them anymore.

How far is far enough away to not need rocket thrusters? What is the point where we don’t need tons of fuel to escape the Earth’s gravitational pull? It’s a trick question because we’re not actually seeking a point where escape is easy but a speed. This speed is known as escape velocity.

The escape velocity from Earth is 40,320 km/h (25,054 m/h). Once we achieve that we don’t need any more fuel to fly away from Earth’s pull. However, at that speed we’re not going far because once we’re away from the Earth we’ll still be stuck in the Sun’s gravitational pull.  Or, depending on what direction we’re going in, we might get stuck in the Moon’s gravitational pull. Which is okay if we were already planning to go to the Moon like Apollo 11 did but not so good if we wanted to go elsewhere.

For simplicity we say it’s the Earth that we are trying to pull away from. But what is the “Earth” really?  It’s a bunch of stuff big and small. The Earth’s big stuff is an inner core, an outer core, a mantle, a crust, oceans, mountains, and the CN Tower.  The small stuff is clocks, hamsters, Cindy at work, bacteria, clothes and chocolate. Pretty much everything on Earth and all of it pulling back at anything trying to escape.

Getting away from everything on Earth and achieving a velocity of thousands of kilometers per hour poses many complications. Complications like the possibility of burning to a crisp or being torn apart. Also, it requires a lot of energy. Even the space shuttles with their tons of fuel didn’t escape the Earth, they merely went into orbit around it.

The concept of escape velocity serves as a good metaphor for the meditation process. The weight of our thoughts holds us to earthly concerns. Our thoughts pull our minds back to mundane matters stopping us from floating in the emptiness and silence of meditative space. We want to float away but the gravity of our thoughts keeps bringing us back.

Thoughts of money, relationships, physical health, oceans, mountains, the CN Tower, clocks, Cindy at work, bacteria, clothes and chocolate. You get the idea, thoughts of pretty much everything but especially the chocolate.

How to Achieve Mental Escape Velocity

Meditation techniques are the rocket thrusters we use to yank our minds away from worldly thoughts. Chanting, breath work, non-judging observation, body movement and epigrams that befuddle the mind are common techniques used by meditation traditions. They all aim to create distance from everyday thoughts and allow immersion into silence and stillness.

We’re not really trying to escape our thoughts we’re just trying to distance ourselves from them for a while. We want to be immersed in quiet and stillness until we’re ready to return to earthly matters.

Rewards of Pushing to Mental Orbit

The more practiced we become at meditation, the faster we get to mental orbit. Meditation is a practice and with practice we get better. As we deepen our meditation, we start further away from our thoughts and we require less effort to distance ourselves from them. This is the reward of pushing through to orbit each time. It gets easier.

If we never break free of our thoughts, if we are forever bound to them without any reprieve whatsoever then meditation is no fun. It’s just a continuous struggle without a payoff. And no none of us really want that.

Luckily for the mind elevater the struggle is not continuous and there is a payoff. With practice we can achieve mental orbit and experience the stillness of meditative space.