You are here: Home / Science Meditation / Potential Energy or is Meditation a Boulder or is it a Ball? 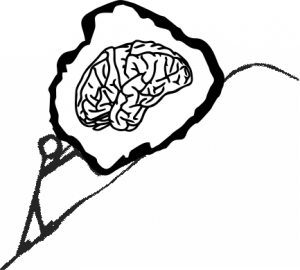 Balls are the most fun and ubiquitous sports equipment in the world. A ball can be thrown, caught, bounced, kicked, batted, hit with a racquet or bashed with a body part. This creates many possibilities for gaming joy.

Before we can have fun with a ball we have to perform work with it. Work is a physics term meaning using force to move a thing from one place to another. We work on a ball by using body forces to move it against the force of gravity. Our work adds energy to the ball, energy that remains patiently inside the ball waiting to be used. Because it’s energy in waiting it’s called potential energy.

A fellow who was cursed with the physics of work and potential energy was the Greek king Sisyphus. In most accounts Sisyphus is depicted to be a horrible person. He is portrayed as a tyrant, a murderer, a schemer and all around contemptible brute. He was condemned by the Greek gods to push a heavy bolder to the top of a hill. But his assignment was ill-fated because before the boulder made it to the very top, it was made to automatically roll down. Sisyphus’ tormentors decided all his work, and the potential energy created from it, should always go back into the earth. And it really was always because Sisyphus was sentenced to perform his task for eternity.

Unlike the plight of  Sisyphus, when we meditate we’re not pushing a boulder, we’re working a ball. Our effort has a purpose and it’s an extremely productive one. By meditating we fill our minds with potential energy. We can expend this energy to improve our focus during our non-meditation hours or we can use it to bring calm to an anxious situation. We can use the potential energy of meditation to invite compassion when our normal reaction would be to be feel anger or resentment. We can use it to encourage cheerfulness in the midst of adversity. For most of us, all these behaviours do not come naturally, they require practice and they require energy, energy that has to come from somewhere.

A mind elevater is not doomed like Sisyphus. The energy of meditation is the energy of sport. Lifting the ball of meditation requires work but once we’ve put in that work, we are free to use the potential energy generated however we want. We can use our meditation energy usefully by expending it on fun, compassion, calm and love.